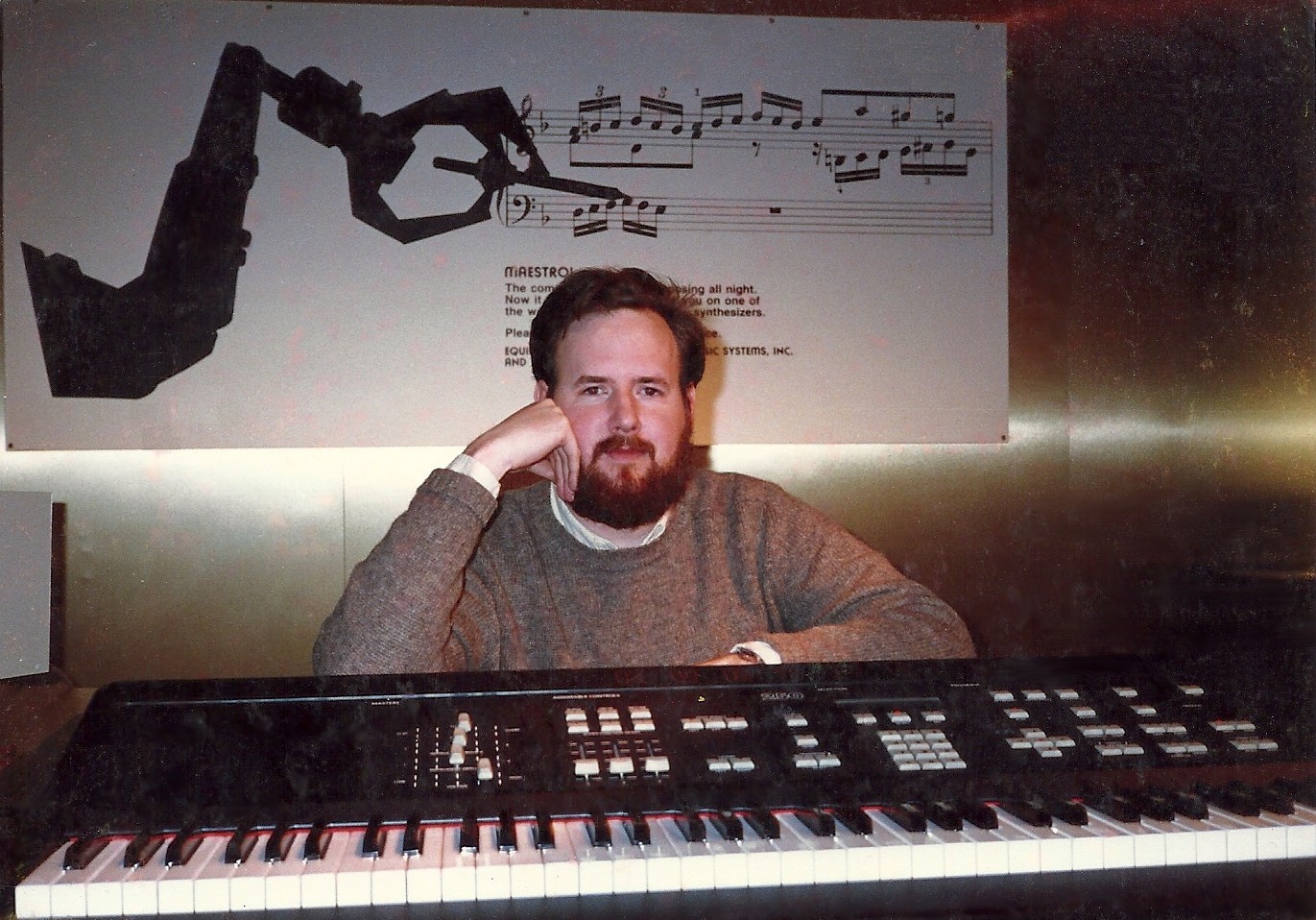 At the opening of the “Cybernetic Composer” installation in Robots and Beyond: The Age of Intelligent Machines. Boston Museum of Science, 1987.

I returned from Tsukuba to Buffalo with a huge need to decompress, wondering how to get on with my life. Somehow I came into contact with Christopher Yavelow, who suggested there might be opportunities with Kurzweil Music Systems and mentioned Wendy Dennis as a contact. Acting the loser, I didn't follow up; however, a week or two later I received a call from Wendy Dennis. Ray Kurzweil was organizing his own exhibition on Artificial Intelligence, and was interested in having someone present composing programs which would feature the Kurzweil 250 synthesizer. I indicated my interest and sent her recordings of Mix or Match examples.

A few days later I got a call from the man himself.

“Did you listen to the Mix or Match pieces?”

“Yeah, they sounded like they came from a lounge somewhere.”

Ray had a dual project in the works. He was writing a book to be titled The Age of Intelligent Machines, and he was simultaneously organizing a traveling exhibition of the same title which was to open at the Boston Museum of Science in 1987 and which was subsequently to tour science museums around the country. The exhibit would naturally feature cutting edge technology such as the Kurzweil 250 synthesizer, the Kurzweil reading machine, and the new Kurzweil voice-recognition system. There would of course be many offering from other vendors, there would be a demonstration of computer-generated art by Harold Cohen, and there would be a demonstration of computer-composed music by me. As things developed, IBM became the major donor; they insisted on changing the exhibition name to Robots and Beyond: The Age of Intelligent Machines.

I was engaged by the Kurzweil Foundation as senior software engineer, with a budget to hire an associate and purchase the new Macintosh “Plus”. Sound components would be provided by Kurzweil Music Systems. The associate selected was Michael Domino, a computer science student at SUNY/Buffalo, who happened also to be a talented guitarist. Mike's sister-in-law just happened to own a computer store, which gave us good prices. The Mac was then adapted to use a large-screen monochrome monitor. Advice from Chris Yavelow led to the Lightspeed C compiler and the MIDIMAC interface from Opcode Systems. Then one day a truck full of sound equipment pulled up from Kurzweil Music Systems. My Kurzweil 250 had arrived. And the great thing was that it was all part of my fee — I wouldn't have to ship everything off to Boston for the opening!

I had intended to call my installation the “Automated Composer”. Ray thought that name boring and renamed it the Cybernetic Composer. A technical description appeared in the 1992 collection, Understanding Music with AI: Perspectives on Music Cognition. Although Mike Domino is listed as co-author, and rightly so, the division of responsibility between Mike and myself was rigorous. I coded the composing programs; Mike coded the presentation software including both display and performance. The text of the article was entirely mine.

Results generated by the Cybernetic Composer were never released as a commercial recording; however, there was a cassette that I gave to Larry Polansky when he invited me to speak at Dartmouth many years ago. I was delighted to learn recently that Larry had digitized 8 examples and placed them on his website. All of the examples were realized using the model 250 synthesizer from Kurzweil Music Systems.

I started out trying to emulate jazz improvisation, having played jazz trumpet during high school and college. Forms were based on twelve-bar blues and standards (e.g. “I Got Rhythm”), with alternate chord-substitution paths. As with Mix or Match I addressed rhythms and pitches in separate passes, where the rhythm pass defined not just times and durations but also note functions: cadence tone, chord tone, and ornamental tone. Departing from the rhythmic patterns from Mix or Match, I opted for grammars which divided long durations into shorter durations. The grammar for Standard Jazz emphasized a “swing eighth” feel.

Theory books devoted to jazz improvisation at the time focused on what “mode” to employ when improvising over a certain chord. I ignored those books and instead developed a collection of ornamental formulae approaching chord tones either diatonically or chromatically. The program would leap from chord tone to chord tone, then consult this collection to fill in the intervening diatonic tones.

Each example of the Standard Jazz genre combined an “improvised” solo melody with background chords, a walking bass line, and a drum part. There was no overt coordination between parts, but each of these roles is pretty well defined in jazz. The uppermost pitches in the background chords were selected by the same pitch engine as the melody, but using a sparse rhythm without ornamental tones. The remaining chord tones were simply blocked in underneath. The walking bass again employed the same pitch engine, but the rhythm in this instance was mostly quarter notes.

My next-attempted genre was Latin jazz, which is why the original jazz genre became “Standard”. This style is most often associated with people such as Stan Getz and Antônio Carlos Jobim. Jobim was the source for most forms and chord progressions. The rhythmic grammar emphasized even eighths, anticipations, and other syncopations. Stylistic differentiation from the Standard Jazz genre comes entirely through form, chord progressions, and rhythm — the pitch engine was the same.

It quickly became clear that the Latin jazz genre needed actual tunes. This was accomplished by dividing the forms into original and imitative passages. Original passages were generated using the rhythmic grammar. Imitative passages were generated by copying an original rhythm and by linking corresponding notes so that the pitch-selection engine could adapt to changing harmonies.

To do rock right you need to deal with pitch bend, but since I didn't (and still don't) have a model for rock pitch bend I compensated with highly syncopated rhythms influenced by Tower of Power's 1975 Urban Renewal album. Originally this genre had straight and funk variants, but I decided I could get richer outcomes by having one genre which could, for example, elect to go straight on the verse and funky on the chorus. The pitch syntax is based on the so-called “blues” scale C-D-Eb-F-Gb-G-Bb with passing chromatic notes, but of course since the pitch engine does not employ scales the behavior is all encoded as ornamental approaches to chord tones.

My ragtime genre was completed after the Robots and Beyond exhibition went live; it was never included in the actual installation. Forms, chord progressions, and rhythms come entirely from Scott Joplin. There is no drum part. Pitch selection for the foreground melody employs the same collection of ornaments used for Standard Jazz and Latin Jazz. The accompaniment realizes a coordinated oom-pah texture which was the impetus of the Complementary Rhythm Generator. Chords were voiced using the methods employed in the Intelligent Part Writer. 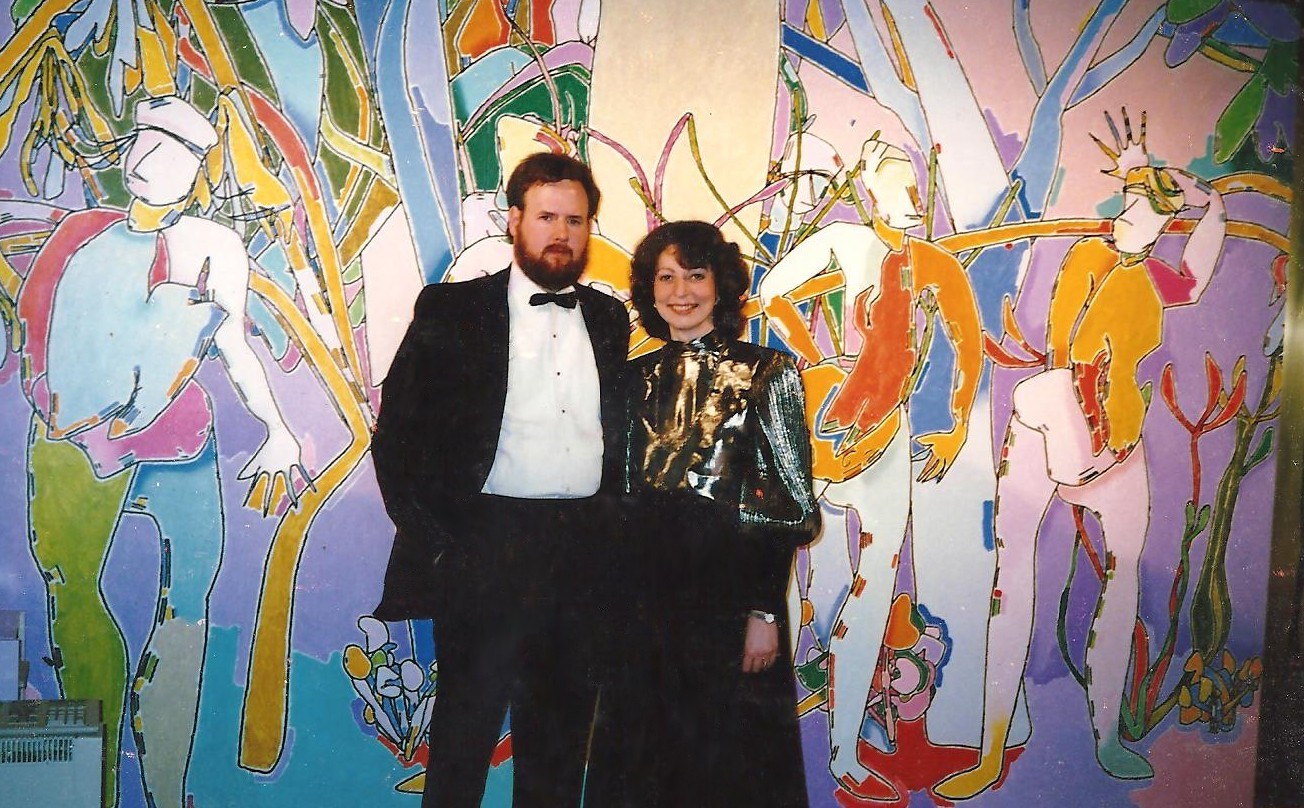 By contrast to the frenzy that opened Expo '85, the Robots and Beyond exhibition began with a black-tie gala where participants and dignitaries dressed up in fancy clothes, ate bland food, and listened to congratulatory speeches. After dinner the event was opened to the press and we all got to tour the exhibits. The response to my own contribution revealed that I should have given more attention to demonstrating the process of compositional decision-making, as Bob Franki had done earlier for Mix or Match: There was Marvin Minksy holding court around my installation while an example of the Rock genre blared away. Minsky extolled the virtues of the Kurzweil 250 synthesizer but wondered why it was being featured in an AI exhibition and why in particular such “awful music” had been chosen to exercise it.

This is how the Cybernetic Composer passed the Turing test.